A new report on EMR market share is out and looks like Cerner’s presence in the large hospital world continued to shrink in 2021.

When faced with the self-described “zinger question” of losing ground among large, acute care hospitals in the US in 2020 to Epic earlier this year, Cerner CEO David Feinberg took refuge in what 2021 may bring and the company’s global marketshare instead. This is how he responded to my question on stage at the ViVE digital health conference organized by HLTH and CHIME held in March in Miami:

First of all, I have immense respect for Judy [Faulkner, CEO of Epic] and all the EHR companies and Epic. The data that you read is from 2020 and it’s KLAS and it’s US-based. It’s a different story in 2021 and it’s a different story worldwide. The largest healthcare electronic health record install in the world is being done today by Cerner.

Feinberg, of course, was referring to the Department of Defense’s $624 million EHR contract that Epic famously lost to Cerner, but here is the problem. It’s old news at this point and that’s the only large EHR installation that Cerner has done recently. In fact, the KLAS report issued on Tuesday paints this picture: “Outside of Cerner’s government contracts, no net-new large health systems have selected Cerner since 2013.”

Specifically, looking at the 5, 479 acute care hospital EMR market in 2021, here’s how KLAS data breaks down by vendor:

The same report from a year ago that looked at 2020 data found Epic at 31 percent of 5,495 hospitals in terms of EMR market share followed by Cerner at 25%. So it clearly is not a “different story in 2021” as Feinberg had declared at ViVE. [The number of acute care hospitals are lower year-to-year due to various reasons, including mergers and acquisitions.]

Turns out that MEDITECH and Epic were the only two EMR vendors in the KLAS report that saw growth in number of hospitals that chose their platform as well as the total number of hospital beds overall. The report found that “MEDITECH saw their second highest net growth in acute care hospital market share, which came primarily from standalone hospitals and customer add-ons. 2021 was also a successful year for MEDITECH in terms of retention among legacy customers; Rather than move to another vendor’s EMR, 74% of legacy customers who made a go-forward decision in 2021 chose to move to Expanse [MEDITECH’s EMR brand]. This is a marked increase from 38% retention in 2020.”

The Westwood, Massachusetts company did not miss a beat in issuing a chest thumping news release.

“Our impressive KLAS rankings and substantial net new wins continue to validate Meditech as a major player in the industry, and it speaks to the tenacious influence the company has had in health IT,” said Helen Waters Meditech’s executive vice president and chief operating officer.

This one chart captures the trajectory that each company mentioned above is on over the past six years. 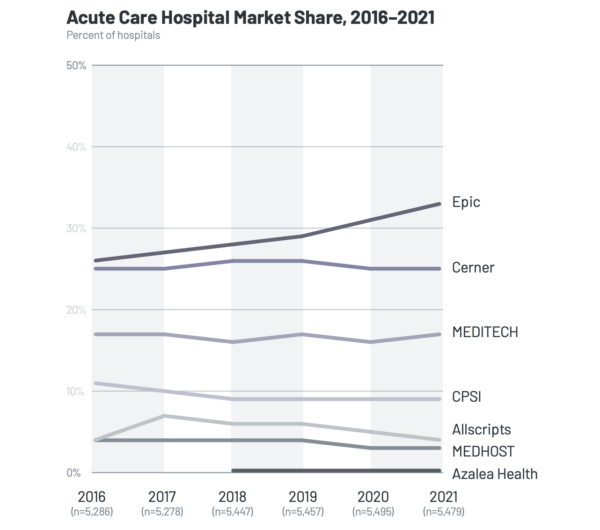 Feinberg must be busy trying to cement the merger with Oracle after some hurdles have emerged that led Oracle to extend its offer two times. But a new strategy must be developed to bring in larger systems into the Cerner fold. Until the above graph tells a truly different story, the “zinger questions” won’t go away.