“The summer before my freshman year, I sent a celebratory tweet after a big Ole Miss Baseball win that got a good number of likes and retweets,” he said.

When the dust settled, Sepko saw he had a message from someone named Debbie Hall, whose bio said she taught in the School of Journalism and New Media’s integrated marketing communications (IMC) program.

She said, ‘You have a way with words. Are you by chance an IMC major?’ I said I was, and we got to meet early in the semester.” 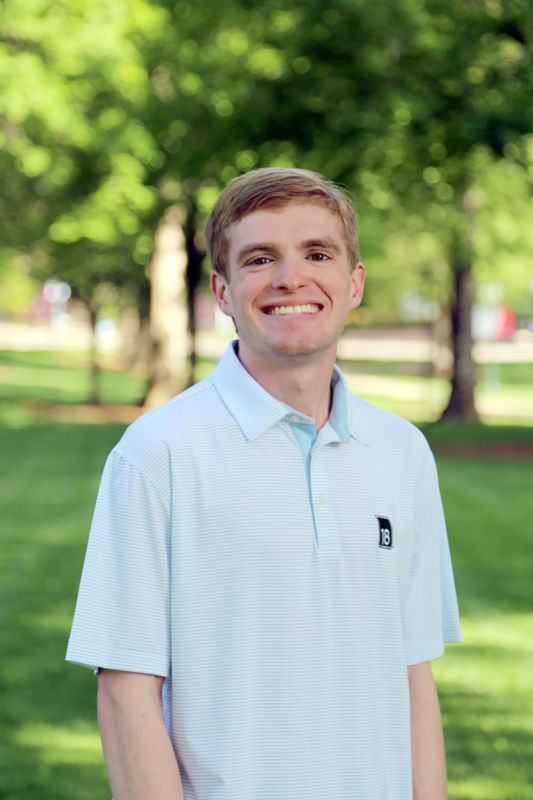 Jackson Sepko stands in the Grove in front of Farley Hall.

Hall recommended that Sepko pursue a social media internship at the Sanderson Farms Championship, a PGA Tour event in Jackson, and with her help, he became the first freshman ever hired there.

“That experience showed me that sports social and digital media was the path for me,” said Sepko, who is just one of the school’s 2022 graduates who shared his Journey to Commencement.

Following that internship, Hall introduced him to Scott Fiene, associate professor of integrated marketing communication, who was teaching a large introductory IMC class that semester.

“Mr. Fiene helped me get an internship covering sports and doing email marketing with HottyToddy.com,” Sepko said. “That experience, paired with my earlier social media work, led me to Ole Miss Athletics, where I’ve been a digital media marketing assistant for the past three years. This work helping to promote the teams I grew up cheering for has been so rewarding and confirmed that I want to continue working in this field.”

That role with Athletics also led Sepko to become involved with the School of Journalism and New Media’s social media, with a particular focus on Instagram. He said getting to highlight the accomplishments of his peers has been exciting.

In addition to his work with Ole Miss Athletics, Sepko is a member of the Honors College.

“That campus community has pushed me to be a better student and a more involved community member and has given me some of my very best friends,” he said. “I also got the opportunity to conduct my capstone thesis on college sports social media marketing, which I defended this November.

“Mrs. Hall and Mr. Fiene were my advisors, and getting to work with two professors who have been professional and personal mentors to me since my freshman year was really gratifying and a kind of ‘full-circle’ moment. That work exposed me to different approaches across five different athletic departments and seven team-specific accounts, and I have no doubt it will be a big help to me in my next professional steps.”

Sepko said he has enjoyed all of his classes, but two stand out. IMC 104, an introductory class, got him hooked on IMC.

“I had Mr. Fiene for that class, and I now have him for Honors IMC 455, the campaigns class,” he said. “Getting to have him again, work on one big campaign team with friends I’ve had for a long time, and apply all the IMC knowledge I’ve learned for this project for The Alluvian Hotel in Greenwood has been another cool ‘full- circle’ moment.”

In Oxford, Sepko works as an English tutor at Oxford High School, and he is a member of Pinelake Church.

“The teaching and community there have kept me and my perspective grounded and reminded me that we exist to be a light and serve others,” he said.

Going through COVID in the middle of college was a unique challenge for Sepko and others, but he said the way everyone united and returned to school and work taught him a lot about the importance of resilience and the power of the community. 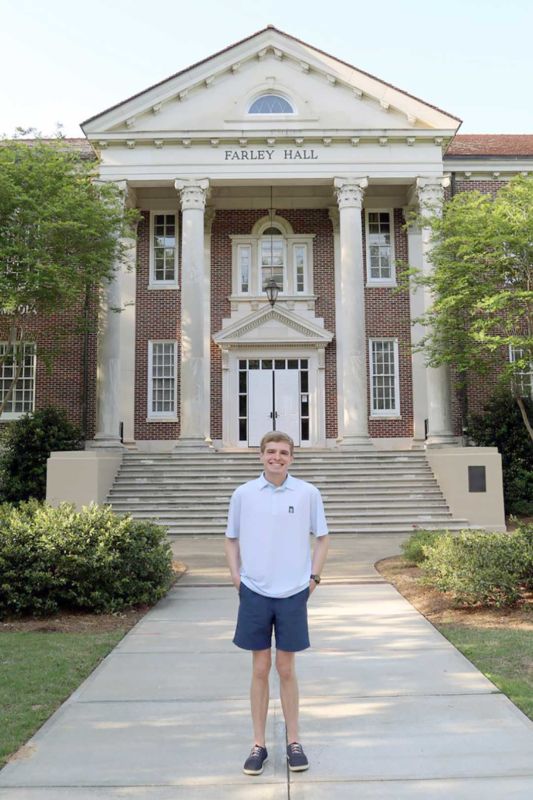 Jackson Sepko stands in the Grove in front of Farley Hall.

“I’m thankful to all our professors and school officials who worked to get us back on campus, and especially grateful for a relatively ‘normal’ close to college,” he said.

Sepko is an interview for sports jobs in social and digital media right now.

“Sports jobs hire a little later than most other jobs coming out of school just because the off-season for most sports is the summer,” he said. “That’s a little nerve-wracking for sure, but I have wonderful bosses and professors who have all been huge help to me, and I’m excited to see where I end up.”

Fiene notes Sepko’s passion and expertise is in sports promotion and social media.

“This started in high school, where as a freshman, he volunteered to keep statistics for his high school football team,” Fiene said. “His creative and clever way of making the interesting statistics led him to become one of the football broadcast announcers halfway through the season, then he started announcing basketball.

“In his sophomore year, he worked with the school administration to upgrade the broadcasting equipment, took the show on the road and eventually assumed responsibility for the coaches program, which had previously been outsourced. Mind you, he was 15-16 years old at the time, but what this demonstrates is that his journey to excellence started well before Ole Miss, and he entered our program with more experience than some students with leave.”

This year, Sepko received the school’s Excellence in IMC award, but in his junior year, he received the Taylor Medal, the University’s highest academic honor. Typically, the award is only given to seniors, and Fiene said Sepko exemplifies all of the things that make our top students special: Perfect 4.0 GPA, Honors College, Chancellor’s Honor Roll, Kappa Tau Alpha Honors Society, Phi Kappa Phi, Lambda Sigma, volunteer experiences, and several internships.

“He’s also tutored Oxford Middle School students in Latin literature and Greek-Roman history…,” said Fiene, “but what strikes me as his greatest strength is his drive, his passion, and his ability to apply his learning and make a difference in the media profession well before he finishes his undergraduate studies.”

Sepko said he initially thought he would need to double-major in communications, marketing or sports management.

“I then discovered the IMC program and realized I had been searching for IMC without realizing it,” he said.

His advice: “I would tell students to soak up every moment and take advantage of every opportunity because college goes by quickly, but it’s full of lots of wonderful opportunities. Don’t be shy about talking to your professors. That will lead to a lot of those opportunities.”

Sepko said UM journalism and IMC students are fortunate to learn from many people who are teaching from their own personal experience in the type of jobs students eventually want to land.

“So take advantage of their real-world connections and soak up all the professional experience you can in your four years,” he said. “Be sure to find the right balance and make lots of good memories with your friends along the way, too.”

This story was written by LaReeca Rucker.