“Method of transporting cattle has sure changed significantly in the past century.”

Railroad cattle cars arrived at Kansas cowtowns before daylight as Flint Hills cowboys were mounted on horseback ready to work.

Mixed colored, big, thin, long yearling steers from Texas rambled out of the train cars into the stockyards.

It was a 30-mile, sometimes longer, cattle drive through vast just turning green Flint Hills to their summer home.

Never has it been publicly recorded any cowboys got lost enroute or returning in the wide-open prairie without direction signs.

Oh, how times have changed. Today, semi loads of cattle, some from Texas but from many other places beyond, arrive at the big pastures.

A portable chute is there for ease of unloading cattle after their long ride. Often just one cowboy, sometimes even without a horse, carefully counts the summer grazers off the long double-decker truck.

Nowadays, the younger, shapelier, more muscular, lightweight cattle may just graze for a few months. Many will come off the pastures in July instead of October like it used to be.

Fortunately, the one most important ingredient that has not changed is the potency of native grasses in the Flint Hills. During May, June and early July, nothing put pounds on cattle more efficiently than the tender, high protein prairie.

On the home front, there are no steers for summer grazing but rather cow-calf pairs and replacement heifers. While eight of the pastures are within a few miles of each other, most of those bovine females and babies are driven horseback.

However, even then several head of cattle, especially ones with tiny newborns are hauled in stock trailers pulled by pickups.

Additional grasslands are quite far away. So, the cattle to be grazed there until fall are hauled in the trailers. Sometimes even large semi-trucks have been hired for the distant transportation process.

Because bulls can be cantankerous moving with cows, they are always hauled to be with their girlfriends for the summer.

One rule of the ranch, unlike many modern-day pastureland managers: “No mechanical carts.” Horses are meant to be used for cattle work.

Reminded of Joshua 21:2: “God commanded access to pastures for our cattle.” 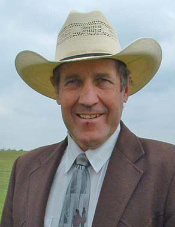 Frank J. Buchman is a lifelong rancher from Alta Vista, a lifetime newspaper writer, syndicated national ag writer and a marketing consultant. He writes a weekly column to share A Cowboy’s Faith.