The world of cryptocurrencies has seen an explosion in advertisements as companies attempt to broaden the appeal and understanding of crypto in the general public. Despite the booming popularity of cryptocurrencies in Q1 of 2022, crypto ad expenditure has since been dipped, with some even being banned for breaching regulations, according to separate data from MediaRadar and Crypto Head.

Crypto Head has suggested these promotions have arguably helped to answer common questions like how to buy crypto, but the surge in advertising has caused alarm and concern among regulators and some members of the public.

Possibly the biggest reason for this, is that crypto-assets are not protected by the Financial Conduct Authority (FCA) in the UK, though people unfamiliar with cryptocurrencies might see an advert and assume they are equally protected. It is imperative investors understand this as it ensures an added level of thought goes into the adverts.

Since 2018, crypto ads have been banned for breaching regulatory guidelines, and this is still occurring in 2022, with Floki Inu and Ziglo failing to capitalise on the post-Super Bowl crypto boom (February 2022) as their ads were banned in the UK. Though it is worth noting that the ads were not banned in the US, the UK ranks 5th worldwide in crypto users, therefore showing that any ban would have a significant impact on new users signing up.

Data from MediaRadar found US advertising for cryptocurrencies and digital exchanges in Q1 2022 was up 94 per cent ($115million) compared to Q4 2021 ($59million). Sixty-four per cent of Q1 2022’s ad spend occurred in February when four crypto brands: Coinbase, Crypto.com, eToroand FTX advertised during the Super Bowl.

The average monthly spend for January and March stands at $20.8million. In April, ad spending decreased 48 per cent month-on-month from March to $10.3million.

coinbase, Crypto.com, eToro, and FTX account for 93 per cent of 2022’s spend (more than $117million) through the end of April and seem to be adjusting spending based on hefty investment in February. Each invested in this year’s Super Bowl, but also controls the majority of the spending in the market.

Again, it is important to note that the ads below were not banned in the US, in which Triple A Estimates there to be 27 million crypto users (8.31 per cent of the population), while in the UK, there are roughly 3.3 million users (4.95 per cent of the population). Despite this difference, the UK ranks fifth worldwide in terms of crypto users, meaning it is definitely a market in which crypto exchanges pump a lot of money into their advertisements.

The majority of crypto advertisements are responsibly made and do not put any vulnerable members of the public at the risk of unwittingly losing their money. However, as regulators such as the Advertising Standards Authority (ASA) try to get to grips with the requirements for adverts in this new industry, an increasing number have been falling foul of established regulations.

Crypto Head highlighted every crypto advertisement that has been banned in the UK by the ASA. Various companies had up to six breaches: Ziglu, Skrill, CoinburpeToro, Exmo Exchangeand Kraken being the most well known though there were more.

Below are the top five companies with the highest amount of breaches:

This ban refers to two separate advertisements for trading platform Crypto.com seen on the Daily Mail app and the Love Balls app. These ads initially fell foul of regulators because they did not state that cryptocurrencies were not regulated in the UK and that values ​​could go down as well as up. This was an issue as they were placed on apps where the audience is not necessarily going to be informed about crypto.

The omission of information regarding CGT was also an issue for regulators, as was the statement ‘Buy Bitcoin with credit card instantly’, as crypto purchases on a credit card could be subject to higher cash interest rates, could be subject to advance fees, and may impact your credit rating which would affect your future borrowing ability.

One of the ads also claimed that investors could ‘Earn up to 3.5 per cent p.a’ which increased to ‘Earn up to 8.5 per cent p.a’. The issue here is that no information was given for the type or length of crypto investment required to make these profits, while there was also no evidence that 8.5 per cent would be paid. This meant the advert also breached the codes of misleading advertising, substantiation and financial products.

Premier League football club Arsenal has also broken advertising regulations for two adverts promoting the Arsenal Fan Token, the sports team’s recent foray into the world of crypto. These ads were banned because they did not both make it clear to the audience that they would need to make an account on sports crypto app Sociosor that they would need to purchase these tokens using another cryptocurrency.

Regulators also found that these advertisements did not adequately inform potential investors of the risks of investing in crypto, that they are an unregulated asset, or that CGT may be payable on any profits.

This paid-for Facebook ad was found to have breached the ASA’s advertising code a total of 12 times, making it the second highest-offending advert in Crypto Head’s list. For instance, the line of text that read ‘£5 in #Bitcoin in 2010 would be worth over £100,000 in January 2021. Don’t miss out on the next decade – get started on Coinbase today’ was deemed misleading as it suggested that the growth seen by Bitcoin was indicative of future levels, which could not be proven.

Also, text saying ‘Buy Bitcoin in 5 minutes with as little as £25’ and ‘Simple and easy to use’ was found to be irresponsible and inappropriate for the marketing of financial products. The ASA claimed this oversimplified the act of investing in crypto, suggesting that it was not a complex and sophisticated investment where values ​​can fall as easily as they rise, while also failing to mention that CGT would be due on any profits.

Another point that was particularly challenging for the ASA was that Coinbase included the text ‘Unregulated’ in a list of bullet points under the header ‘The Competition’, which implied that investing in cryptocurrency would be a regulated activity with Coinbase, which is not the case.

This ban relates to an in-app ad for cryptocurrency exchange service Luno which appeared on the Daily Mail Online app and stated ‘Invest in crypto for as little as £1’.

The ad was deemed to be misleading as there was no mention that you would need to pay fees in order to trade cryptocurrencies, while also failing to warn consumers of the risks of crypto trading such as the potential for losses or the fact that crypto investments are not regulated.

The ASA also found this ad to be taking advantage of consumers’ inexperience or credulity by suggesting that investing in cryptocurrency was simple and by failing to mention that CGT would be due on any profits.

This regional press ad was seen in the Northamptonshire Telegraph and was titled “There is no point in keeping your money in the bank…”. It featured the image and name of a woman, aged 63, along with lines of text that included “Today there is no point keeping it in the bank”, “when I received my pension, I put a third of it into gold, a The third of it into silver and the remainder into Bitcoin”, and “Bitcoin is digital gold and it has allowed me to take the steps to secure the cash I already have”.

The ASA found that the overall message of the ad was that buying Bitcoin represented a secure investment and that this implied crypto investing was just as regulated as any other financial transaction. The ad directly compared investing savings in Bitcoin with the use of regulated services, discouraging consumers from placing their money in banks, leading it to be labeled as misleading and receiving a ban.

The most common types of advertising code breaches

Having looked at all of the crypto advertising bans in the UK so far, Crypto Head assessed which types of advertising breaches were the most common. 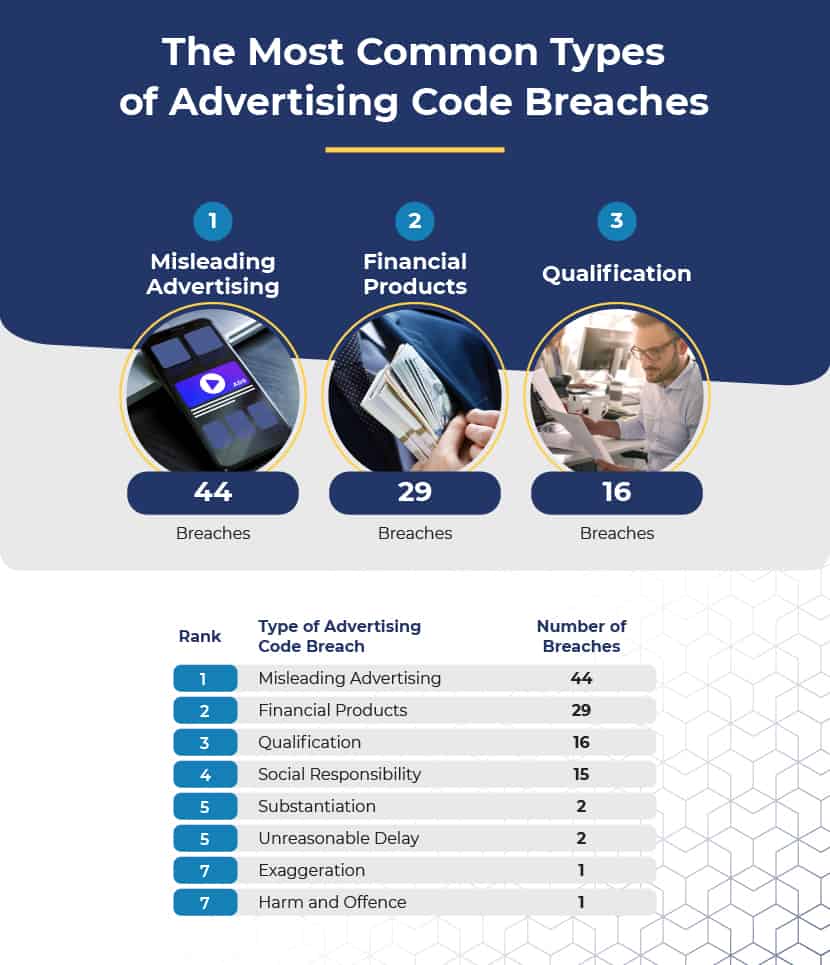