On April 28, crowds of hundreds of energetic students buzzed around the fountain on De Anza College’s main quad for the first in-person Club Day since the pandemic. The event was hosted by the college’s Inter Club Council. This year’s event catered to all students by hosting both a virtual and an in-person option to allow students an opportunity to learn and potentially join student clubs.

Tables were decorated with informational posters lined up side-by-side, with balloons, music and other props that gave insight into each club. Clubs offered free snacks, DIY activities and games to win prizes. A total of 28 clubs were in attendance, some being Active Minds, the Outdoor Club, Zero Waste Club, Mentors at De Anza, and the Music and Volunteering Association.

Tara Samadar, 19, psychology major said that she hasn’t been on campus this quarter until Club Day.

“As soon as I came, everything was so lively,” Samadar said. “To see the student body thriving despite COVID is really nice.”

“I was a little bit surprised that so many people showed up,” Desta said. “It looks really exciting, very busy, and everyone has been super nice so far and reaching out to one another.”

Another student, psychology major Len Luu, 19, who previously attended the virtual portion of club day said that he appreciated the in-person energy of the crowd.

“Everyone looks so happy to be here,” said Luu.

Before the in-person event, the ICC also hosted a virtual portion held over Zoom on April 22 where over 100 students attended. Each club took turns giving a short presentation and advertising themselves.

At past virtual club days, students would access breakout rooms to talk further with clubs that interested them. Luu believes it made it harder to listen and find interest in the clubs who presented, and preferred attending the in-person event.

“For me, it’s much harder to engage with clubs through an online zoom meeting compared to in-person, where you can talk to officers and ask them questions, “ Luu said. “That’s easier than sitting at home in your chair thinking, ‘oh wow I’m getting super distracted listening to these people talking about their clubs.”

Even so, Desta said that she believes that virtual club day remains an effective way to inform and recruit students to get more involved in De Anza’s extra curriculars. She joined the Black Student Union and Red Cross clubs after meeting them online last fall.

“The virtual ones were the best they could be under those circumstances, but I think in-person club day is a lot better,” Desta said. “It’s much easier to interact with others. Whereas most people don’t even have their cameras turned on online.”

For students that were comfortable and cleared to be on campus, attending the live event had added benefits beyond just the opportunity to socialize according to Sai Manaswini Nabadhanam, 21, computer science major, who was able to win an Amazon gift card through one club’s activities . Nabadhanam said that the day was more than she could’ve anticipated.

“After being quarantined for a few quarters, it feels really awesome to be outside doing a real club day,” Nabadhanam said. “I’m glad we are doing this today, because I needed this. It really means a lot. ” 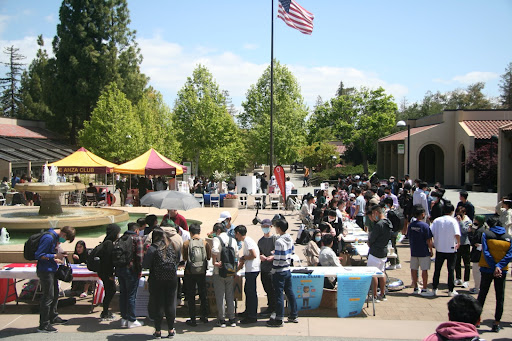 De Anza students fill the main quad as they attend in Club Day.

To advertise the event, officers mainly relied on various forms of social media tools like Instagram, Discord and email listings to spread the word. They also used more traditional methods such as posting flyers around campus. Active Minds Club officer and business major, Christy Fan, 20, said that she found that both in-person and virtual events were important to gain traction and advertising the club, as Active Minds became inactive for the majority of the pandemic.

“It’s really important to advertise through both methods,” said Fan. “Before this team of officers took over the club, the previous officers did not know how to transition from in-person to virtual. When we took over, we had to put in a lot of work to get it going again. We focused on social media marketing and rebranded ourselves to hold consistent meetings and events to get people interested again and to create change on campus.”

The Active Minds Club was also recently able to hold their own in-person event: a fundraiser in partnership with Panda Express.

“We are very grateful for every time we meet and we have new people showing up,” Fan said. “Today we hope to talk to people that would not normally be involved in campus clubs and hopefully get them to join us.”

The Zero Waste Club led by Annabelle Law, 19, environmental studies major, recounted their own issues throughout the pandemic.

“I didn’t meet anyone in person last year. Maybe once — It was a bit awkward,” said Law. “It was stressful for officers because all we could do was presentations or zoom socials and it’s not that engaging. It gets repetitive.”

“I hope that we get people that want to be active,” Hughes. “We have gotten people to join but we want to make more of a community and I hope we find some really exciting people to carry on and go farther than we have this year.”

Business administration major Celine Nghiem, 19, said that they are part of various clubs in order to gain a sense of community through them. Nghiem is an officer for the Creative Writers Club and an active member at the LGBTQ Alliance Club, the Climate Awareness Club, the Outdoor Club and MVA.

“I did not want to be lonely for the entire two years I would be here,” Nghiem said. “Being new to De Anza and completely online you don’t really get to meet any people, and I just wanted to connect with other students and make some friends.”

Elena Burlanescu, a second year business major, said that she advises students to get involved early.

“I regret waiting so long to join any clubs,” Burlanescu said, “If I were to join clubs in my first year, I would have had a much better college life. But it’s better late than never. Join clubs.”