Company scammed Washingtonians out of tens of thousands of dollars

SEATTLE — Attorney General Bob Ferguson filed a lawsuit today against a South Carolina company offering a deceptive online training program that duped Washingtonians into paying $30,000 for an online course. The company, Prehired LLC, issued the following guarantee in its marketing materials: “We guarantee you land a $60k+ job offer (from a tech company YOU choose).”

This guarantee, which was only one of Prehired’s deceptive marketing claims, proved to be a lie — and, consequently, illegal. When students failed to pay on massive debt from the program, Prehired used aggressive collection techniques like lawsuits and forced arbitration to get the money.

The lawsuit, filed in King County Superior Court, asserts Prehired and its owner, Joshua Jordan, violated the state Consumer Protection Act by engaging in deceptive advertising, as well as deceptive collection practices. The lawsuit also asserts Prehired broke the law by operating in the state without a license. Operating a private vocational school in the state without a license makes any contracts for payment unenforceable. In addition to the lawsuit, the Attorney General’s Office will also file a preliminary injunction seeking to immediately stop Jordan and his school from operating in the state while the lawsuit continues.

The lawsuit will seek restitution for any Washingtonians who signed up for the online training program, as well as costs, fees and civil penalties. The Consumer Protection Act allows the Attorney General to seek up to $7,500 for every violation.

“Washingtonians forked over tens of thousands of dollars in hard-earned money based on Joshua Jordan’s lies,” Ferguson said. “I intend to make sure Jordan and his company do not prey on anyone else. I will fight to see his victims paid back and help get them out from under these illegal contracts.”

Prehired has been operating online since May 2017 and advertises itself as a “tech sales bootcamp” that prepares individuals for a career in software sales. It offers online software sales training that lasts six to 12 weeks as well as job placement through access to internal mentors who help them find employment.

In reality, the program consists of a course of 15 hours of videos Jordan made himself to teach people how to begin a “six figure career.” He claimed his program prepared students, including those with a high school diploma or GED and no sales experience, for jobs starting with a salary of at least $69,000. The Attorney General’s Office asserts that starting salary is reflective of industry standards for software sales, and not reflective of Prehired’s ability to get a larger salary for anyone in the program.

The company claims 90 percent of its students find employment, but it does not disclose that students have to apply to 20 or more jobs a week until they find employment as part of the program or risk voiding the job guarantee. Nor does that total include any students who left the program early or Prehired removed from it, which allowed the company to keep that percentage artificially high.

The contract also required students to adhere to a “Code of Conduct,” which includes items like not disparaging the company and requiring students to return communications from the company within two business days. Failure to follow any of these requirements meant Prehired could remove anyone from the program, while still charging them full price. 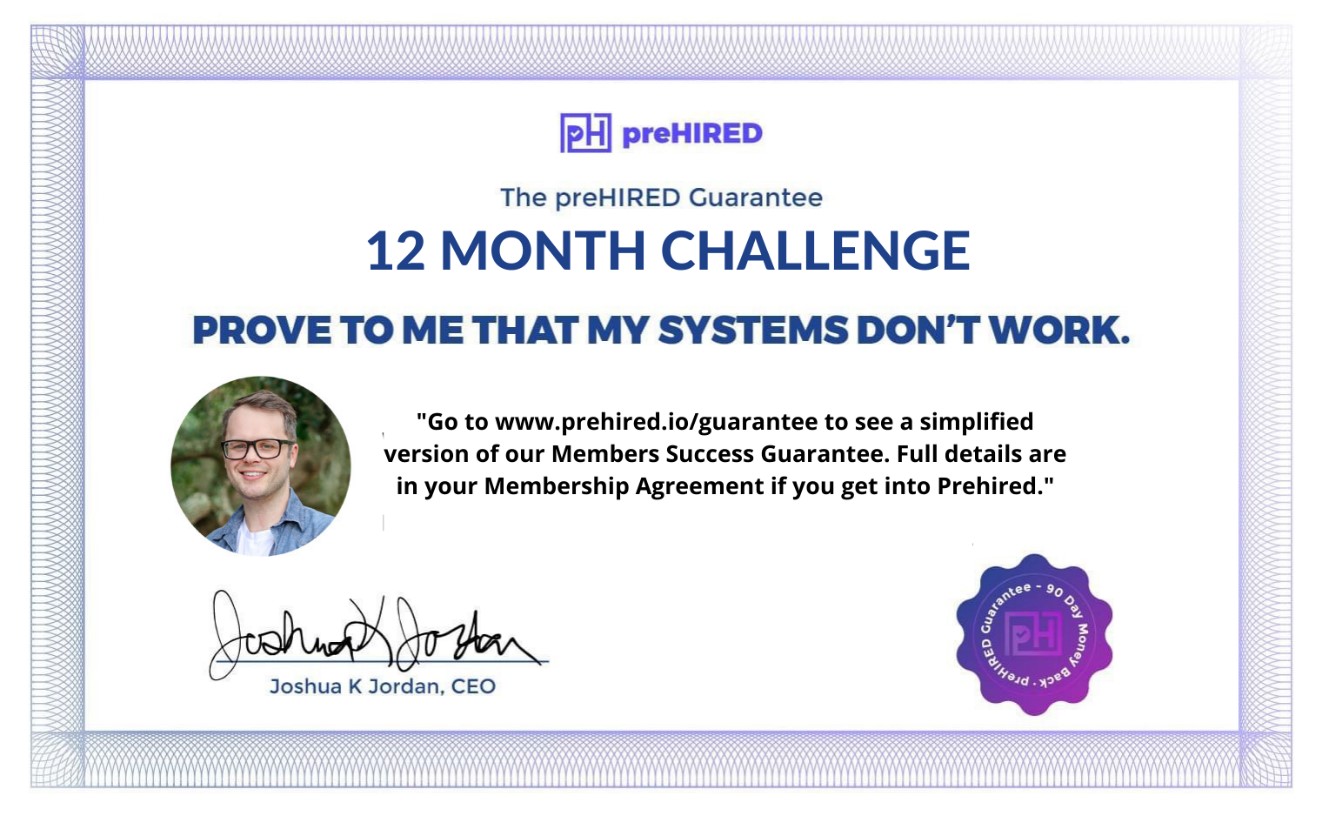 While it offered students a flat fee to start the program, the Attorney General’s Office believes most individuals — including those from vulnerable communities or military veterans — financed up to $30,000 over the course of up to eight years. Through advertising, Prehired steered individuals into this more expensive, longer-term payment program.

Prehired induces prospective students to pay between $5,000 and $15,000 for the training and membership up front, or sign an “Income Sharing Agreement” to pay up to $30,000 over up to eight years if enrollees opt to pay for the program once they have a job. Further, Prehired’s contracts require any students who leave the course after a week of training to still pay up to $30,000, regardless of where they find employment. Prehired’s restrictive cancellation policy violates state laws requiring vocational schools to follow a uniform refund policy.

Further, the Attorney General’s Office asserts that Washington state contracts are invalid because Prehired is in reality a vocational school without a license.

Prehired targeted students who did not make prompt payments with aggressive collection tactics. First, Jordan sued nearly 300 students from across the country to try to collect millions of dollars Prehired claimed they owed. He later abandoned that effort after the Consumer Protection Unit of the Delaware Department of Justice began investigating Prehired’s activities.

Prehired and Jordan then attempted to force students into private arbitration. In late May, the Attorney General’s Office sent the company a cease and desist letter to stop collecting on debts from Washingtonians, but Jordan has not satisfactorily responded to the letter.