Piyush Kumar had lost two back-to-back games. One more setback, and the former India head of marketing for Swiss watch brand Rado was sure to lose the match. “I knew it was all about one wrong move. And it was weighing heavily on my mind,” recalls Kumar, who started Rooter in June 2016 as a sports fans’ community engagement startup. The idea was to build a large group of fans through a tech platform that would keep sports lovers hooked through live prediction games, match chat forums, quizzes, trivia, and all kinds of updates.

Till August 2018, the first-time entrepreneur kept on tirelessly building an army of fans. The results were encouragement. In August, Rooter was selected for the 2018 leAD Sports Accelerator programme, a Berlin-based sports entrepreneurship platform backed by the Adidas family. Being chosen from among 400 startups globally, including 59 from India, was no mean achievement. In Kumar’s heart, however, something was missing.

Rooter had stagnated; it was not growing. “At our peak, we had around 2 lakh users per month. That’s it. It didn’t grow beyond that,” recalls Kumar, who decided to pivot. So the focus shifted to building user generated content (UGC) by using live audio, live video and other forms of sports content. “We wanted to provide sports content in a way that nobody else was providing,” says Kumar. An explosion in smartphone user base, thanks in large measure to Jio and its accessible broadband play, was exactly what the doctor prescribed for Kumar. In one-and-a-half years, Rooter grew at a fast clip. While MAU (monthly active users) jumped to 5 lakh, daily active users surpassed 50,000. “I thought we had found a product-market fit,” he says.

Also read: Why is esports becoming a significant part of sports marketing in India?

Back in May 2020, Kumar was at a crossroads. He was all set for his second pivot. And what was resonating in his head was a speech of his role model Roger Federer. The Swiss tennis champion was two sets down against French rival Julien Benneteau in the third round of Wimbledon in 2012. Losing the third set would have been disastrous for Federer, who was coming into the championship without a Grand Slam victory for over two-and- a-half years. “When you’re down two-sets-to-love,” Federer said after his incredible win, “stay calm.” He outlined what was going inside his head. “Obviously your friends and family are freaking out. You just play point for point,” he underlined. “It sounds boring, but it’s the only thing to do.”

Kumar, too, was struggling to grapple with a volley of emotions. The lockdown in March meant a full stop to all sporting activities. For a UGC platform, no live sporting events meant disaster. There was something more disastrous, though. In April 2020, amidst the lockdown, Rooter announced a new funding of $1.7 million led by Paytm, leAD sports and others. Now a month later, Kumar was mulling to pivot. “Had this gone wrong, it would have been a dead-end for me,” he says. Egged on by the never-say-die spirit of a sporting fan, the gritty founder mustered courage and Rooter morphed into a game and esports streaming platform.

Two years later, the results are for all to see. The user base leapfrogged jumped from 1 million in March 2020 to 9.5 million this March. And the juggernaut continues to gather pace as the numbers shot to 11.5 million in April. Revenues too jumped from a few lakh in FY20 to ₹2 crore in FY21 to ₹12 crore in FY22. The startup is now clocking a revenue run-rate of ₹60 crore for FY23. In terms of funding, it found more takers. In January, it raised $25 million (around ₹185 crore) in a Series A round led by Lightbox, March Gaming and Duane Park Ventures.

Growth on other key metrics too looks promising. MAUs have touched the 14 million-mark, there have been 42 million app downloads till May, and the startup claims to have 1 million unique content creators on its platform every month. In terms of building content, Rooter has maintained an aggressive approach. Last December, it roped in cricketers Yuzvendra Chahal and Riyan Parag, and it recently inked an exclusive deal with GodLike, India’s biggest and most popular esports team (see box).

For Kumar, the growth has been satisfying. ‘We have emerged as the biggest game streaming and esports platform in India,’ he claims, adding that the platform is set for an even bigger growth over the next few months. “The idea is to become India’s Twitch,” says Kumar, alluding to the world’s biggest live streaming platform which was bought by Amazon in 2014 for close to a billion dollars. 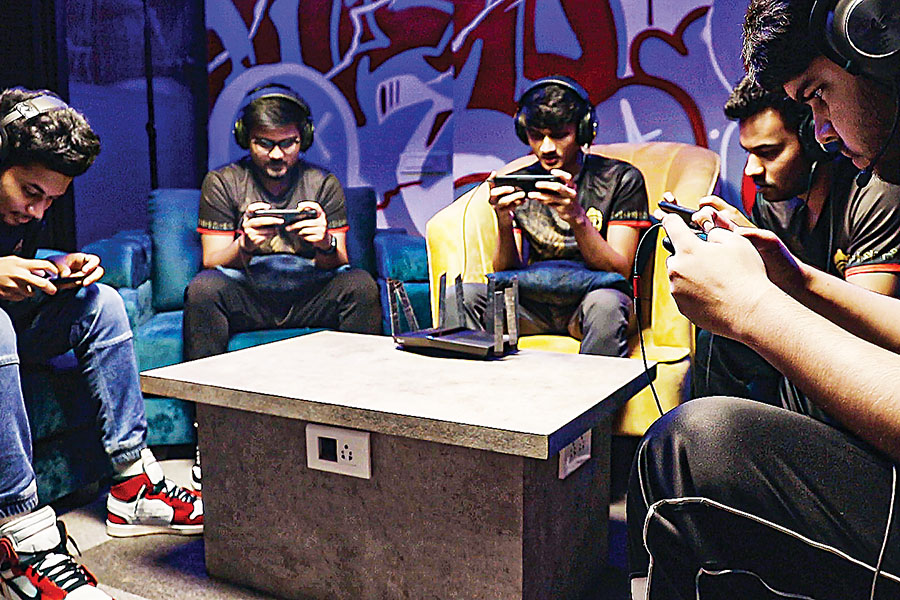 Back home, Rooter’s growth has coincided with a booming esports and video streaming market in India which was at a take-off stage in 2019. The number of viewers swelled from 9 million in FY19 to 17 million in FY21, according to an EY report on esports released in June 2021. Over the next fiscal, the viewer base ballooned to 25 million, and it is estimated to touch a staggering 85 million in FY25.

What has led to a boom in viewership is a corresponding steep rise in the number of players. While in 2021, India had 1.5 lakh esports players, it is expected to jump to 1.5 million by 2025, predicts the EY report. The icing on the cake, though, is a rise in the booty. The industry is projected to surpass the Indian Premier League (IPL) in terms of prize money by offering a prize pool of ₹1 billion by FY25, says the report. 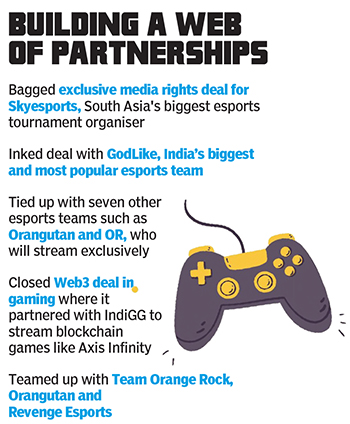 Industry watchers and venture capitalists are not surprised with a stratospheric growth in esports in India. Gaming, reckons Sid Talwar, partner at Lightbox, is the future of social media for the next generation. “Around 92 percent of Gen-Z and millennials playing games,” he says, adding that the gamers are more engaged, more invested, and far more eager to contribute to gaming platforms than any traditional social media user today. The kind of games Rooter streams, he underlines, brings people together for a larger purpose. “And this is the most exciting part. Through this you can do a lot of things around commerce and advertising.”

Kumar is furiously adding more monetisation engines. Advertising, performance and influencer marketing, sponsorship, events and user monetisation are some of the ways Rooter has been making money, he explains. The challenge now, he underlines, is to keep up the tempo. “We have set a target of touching 40 million MAUs by end of next year,” he says. What Kumar, though, must keep in mind is that a strong adrenalin rush must not take his eyes away from building a profitable and sustainable business over the next few years. This is what his heart would be rooting for.

Click here to see Forbes India’s comprehensive coverage on the Covid-19 situation and its impact on life, business and the economy​

Check out our anniversary discounts on subscriptions, upto 50% off the website price, free digital access with print. Use coupon code : ANN2022P for print and ANN2022D for digital. Click here for details.

(This story appears in the 17 June, 2022 issue of Forbes India. To visit our Archives, click here.)

We use cookies to ensure that we give you the best experience on our website. If you continue to use this site we will assume that you are happy with it.Ok