AP — One by one, several of Donald Trump’s former top advisers have told a special House committee investigating his role in the Jan. 6 insurrection that they didn’t believe his lies about the 2020 election, and that the former president knew he lost to Joe Biden.

But instead of convincing Trump’s most stalwart supporters, testimony from simply former attorney general Bill Barr and Trump’s daughter Ivanka about the election and the attack on the US Capitol is prompting many of them to reassert their views that the former president was correct in his false claim of victory.

Barr’s testimony that Trump was repeatedly told there was no election fraud? He was paid off by a voting machine company, according to one false claim that went viral this week. Ivanka Trump saying she didn’t believe Trump either? It’s all part of Trump’s grand plan to confuse his enemies and save America.

The claims again demonstrate how deeply rooted Trump’s false narrative about the election has become.

“It’s cognitive dissonance,” said Jennifer Stromer-Galley, a Syracuse University professor who has studied how Trump used social media and advertising to mobilize his base. “If you believe what Trump says, and now Bill Barr and Trump’s own daughter are saying these other things, it creates a crack, and people have to fill it.”

The lawmakers leading the hearings into the deadly attack on the US Capitol said one of their goals is to show how Trump repeatedly lied to his supporters in an effort to hold onto power and subvert American democracy.

In this image from video released by the House Select Committee, an exhibit shows Ivanka Trump, former White House senior adviser, during a video interview with the House select committee investigating the Jan. 6 attack on the US Capitol at the hearing, June 16, 2022, on Capitol Hill in Washington. (House Select Committee via AP)

“President Trump invested millions of dollars of campaign funds purposely spreading false information, running ads he knew were false, and convincing millions of Americans that the election was corrupt and he was the true president,” said Rep. Liz Cheney, the panel’s vice-chair. “As you will see, this misinformation campaign provoked the violence on January 6th.”

For those who accept Trump’s baseless claims, Barr’s testimony was especially jarring. In his interview with investigators, he detailed Trump’s many absurd claims about the election 2020, calling them “bogus” and “idiotic.”

Barr told the committee when he talked with Trump, “there was never an indication of interest in what the actual facts were.”

“He’s become detached from reality if he really believes this stuff,” Barr said.

Following his testimony, many Trump supporters using sites likedit, GETTR and Telegram blasted Barr as a turncoat and noted that he’s disputed Trump’s election claims before.

But many others began grasping for alternative explanations for this testimony.

“I’m still hoping Barr is playing a role,” one poster said on a Telegram channel popular with Trump supporters. 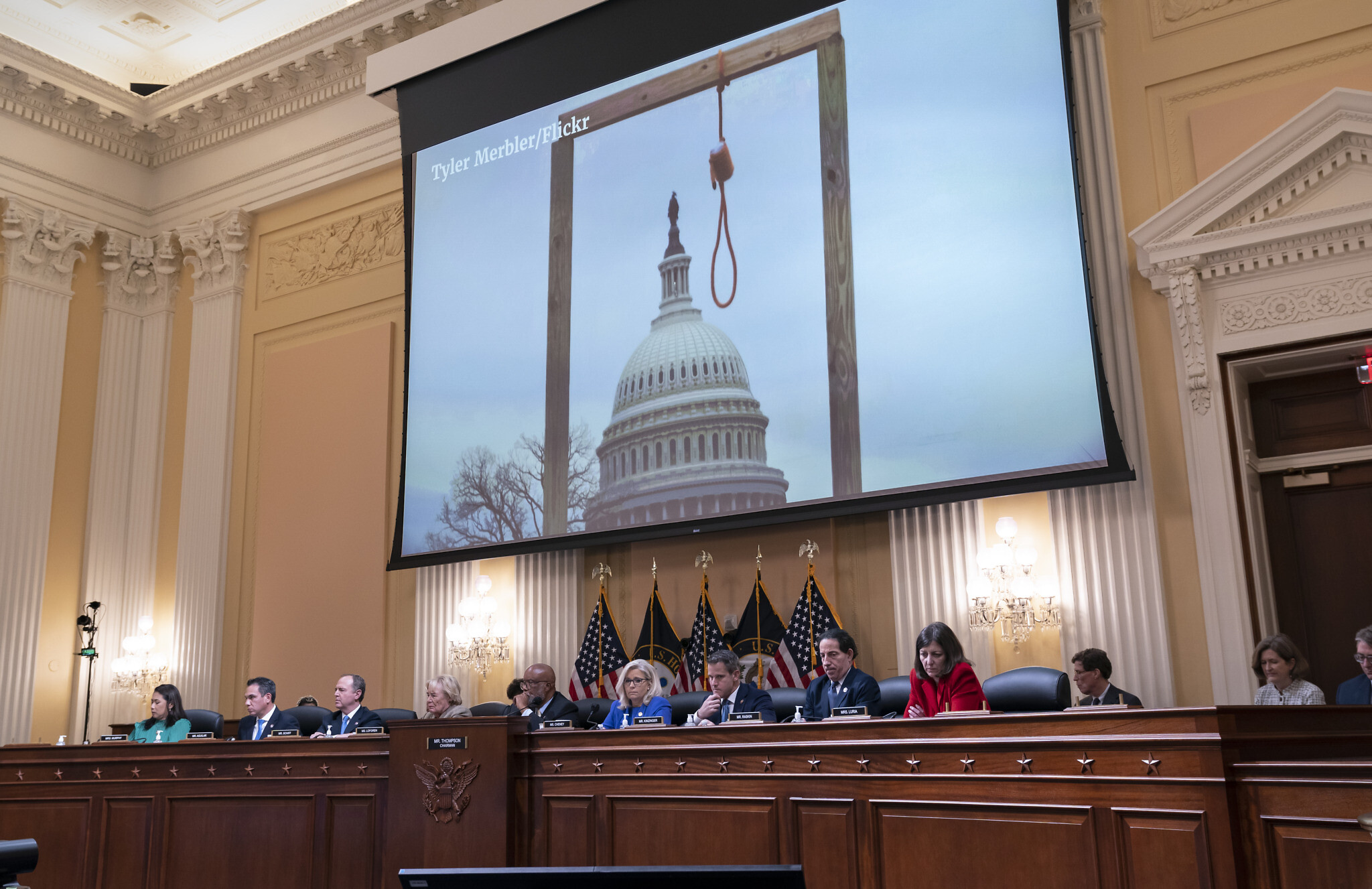 An image of a mock gallows on the grounds of the US Capitol on Jan. 6, 2021, is shown as the House select committee investigating the Jan. 6 attack on the US Capitol holds its first public hearing to reveal the findings of a year-long investigation, at the Capitol in Washington, Thursday, June 9, 2022. (AP Photo/J. Scott Applewhite)

One post that spread widely this week suggested Barr was paid by Dominion Voting Systems, a company targeted by Trump and his supporters with baseless claims of vote-rigging. From 2009 to 2018, DOMINION PAID BARR $1.2 million in cash and granted him another $1.1 million in stock awards, according to SEC filings. (No wonder Barr can’t find any voter fraud!),” the post read.

Wrong Dominion. Barr was paid by Dominion Energy, a publicly-traded company headquartered in Richmond, Virginia, that provides power and heat to customers in several mid-Atlantic states.

Unlike Barr, Ivanka Trump has remained intensely popular with many Trump supporters and is seen by many as her father’s potential successor. That may be why so many had to find an alternative explanation for why she told Congress she didn’t accept her father’s claims. 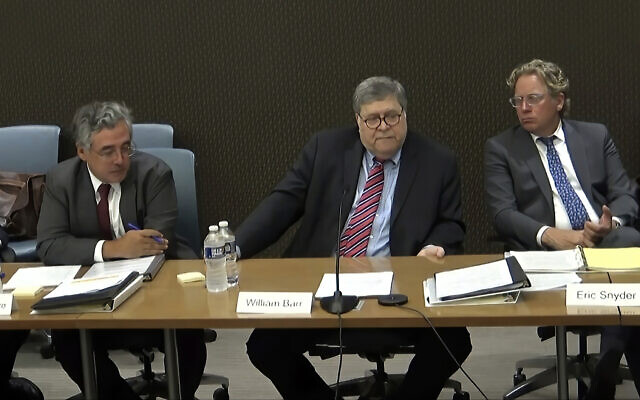 In this image from video released by the House Select Committee, former Attorney General William Barr speaks during a video deposition to the House select committee investigating the Jan. 6 attack on the US Capitol, that was shown as an exhibit at the hearing, June 13, 2022, on Capitol Hill in Washington. (House Select Committee via AP)

Jordan Sather, a leading proponent of the QAnon theory, claims both Barr and Ivanka Trump led during their testimony on Trump’s orders, part of an elaborate scheme to defeat Trump’s enemies by confusing Congress and the American public.

“I can just imagine Donald Trump telling Ivanka: ‘Hey, go to this hearing, say these things. Screw with their heads,’” Sather said last week on his online show.

Some Trump supporters dismissed Ivanka Trump’s testimony entirely by questioning whether any of it was real. That’s another common refrain seen on far-right message boards. Many posters say they don’t even believe the hearings are happening, but are a Hollywood production starring stand-ins for the former president’s daughter and others.

“She looks different in a big way,” one poster asked on Telegram. “CGI?”

Supporting The Times of Israel isn’t a transaction for an online service, like subscribing to Netflix. The ToI Community is for people like you who care about a common good: ensuring that balanced, responsible coverage of Israel continues to be available to millions across the world, for free.

Sure, we’ll remove all ads from your page and you’ll gain access to some amazing Community-only content. But your support gives you something more profound than that: the pride of joining something that really matters.

Join the Times of Israel Community Join our Community Already a member? Sign in to stop seeing this

We’re really pleased that you’ve read X Times of Israel articles in the past month.

That’s why we started the Times of Israel ten years ago – to provide discerning readers like you with must-read coverage of Israel and the Jewish world.

So now we have a request. Unlike other news outlets, we haven’t put up a paywall. But as the journalism we do is costly, we invite readers for whom The Times of Israel has become important to help support our work by joining The Times of Israel Community.

For as little as $6 a month you can help support our quality journalism while enjoying The Times of Israel AD-FREEas well as accessing exclusive content available only to Times of Israel Community members.

Thank you,
David Horovitz, Founding Editor of The Times of Israel