The penny suddenly dropped. It was a few months into 2010. Salman Khan had quit his high paying and impressive job as a hedge fund analyst in 2009, and finally converted his five-year old ‘admirable hobby’ into his new profession. “So, what do you do,” quizzed one of the couple who bumped into Khan and his wife at a dinner event in Palo Alto, California. The Harvard grad, who was also armed with three degrees from MIT, did his best to dish out an impressive reply. “Well, I am running this project which is not-for-profit,” Khan said proudly. “I’ve made some software, and also make YouTube videos on math and science which are getting popular,” he continued, listing his nascent achievements. “I am looking for people who can donate as this project will definitely turn into something big,” he finished, hoping to hear words of encouragement.

The silence, though, was deafening. The couple quickly walked away. It was, however, their hushed conversation that cut like a knife. “One of them said, ‘Good thing that his wife is training to be a doctor’,” recalls Khan, who overheard the gossip. The uncharitable comment was devastating. “It hit my fragile male ego very heavily,” he recounts. “It was like a sucker punch,” he adds. Until a year ago, Khan was courted by everybody during dinner parties and social gatherings. The biggest pull for the then hedge fund analyst was his professional background and enviable educational pedigree: Bachelor of Science in math and computer science, and master of engineering from Massachusetts Institute of Technology; and an MBA from Harvard. “When I used to go to dinner parties and introduce myself to people, they used to be mighty impressed,” he recalls. “They used to talk very nicely,” he adds.

Well, a lot changed after Khan quit his job. In fact, he started talking to himself. And this was not a good symptom. “I would wake up in the middle of the night in a cold sweat,” he recalls. “I used to wonder what I had done to myself and to my family,” he says, narrating those haunting moments. It was in 2004 that Khan started making math tutorials for his cousins. The next year, he got the domain name—Khan Academy—and in 2006 he set up a YouTube channel and started uploading educational videos.

The response was encouragement. Khan’s appeal now spreads much beyond his family, he started amassing users every day, and letters of appreciation were pouring in from all parts of the US. “It kept me going and I realised there’s a real value here,” he says. “It was incredibly rewarding,” he recalls. The fact that people were benefitting enormously from the free lessons had a message that the venture was making an impact, and could be scaled. Khan, who pursued his ‘hobby’ of uploading free tutorials till 2009, decided to quit his job and take a plunge into the not-for-profit world of education. The biggest trigger to lead a profit-less life was MIT. “I was inspired by MIT OpenCourseWare, a web-based publication of MIT course content,” he says. A lot of universities, he lets on, will try to teach students values ​​and ethics. “But when push comes to shove, very few take a stand,” he underlines. 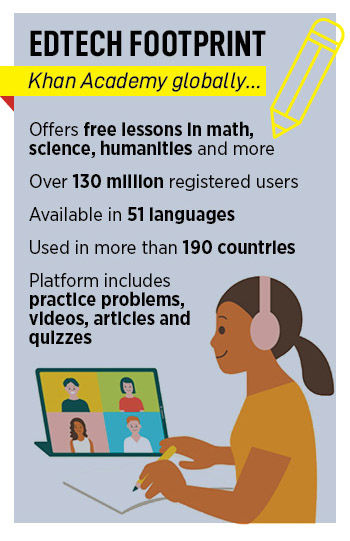 There was another inspiration. Khan was attempting to do something audacious, which was perceived by many as outrageous. “They thought I am squandering a lot,” he says, alluding to the reactions of his friends, well-wishers and all who mattered and not mattered so much. Khan, though, was clear in his mind. What can for-profit organizations aspire to be, he asked. “You can become the next Google, the next Facebook, or the next Apple,” was the logical reply. Now, what could a not-for-profit aspire to be, he flipped the question. “Well, you could become the next Harvard, the next Oxford, the next Smithsonian,” came the reply from within. Khan listened to his heart, and took the plunge.

A few months into it, his heart was in his mouth. “For eight months, I was out of a job. It meant zero income,” he says. Khan was alarmingly dipping into his savings, which he had stockpiled for buying a house. “Those months were incredibly stressful,” he recalls.

The lowest moment, though, was the day before he met Ann Doerr. A trustee of Rice University, Doerr had started her career as an engineer, and had held various engineering and management positions at Intel, Silicon Compilers, and Tandem Computers. In May 2010, the electrical engineer donated $10,000 to Khan Academy. “This is the largest donation that Khan Academy has ever received,” he dropped an email to Doerr, thanking her for her incredibly generous donation. Doer replied. “I love what you’re doing. My daughter uses the resources, I use it,” she underlined.

What happened next was a lunch meeting. Doerr had just one query. “How are you supporting yourself?” she asked. Khan paused for a while, and gave an honest reply. “I am not.” The meeting ended, Khan came back to his house and saw a text message from Doerr: You really need to be supporting yourself. I’ve just wired you $100,000. “The money was valuable. It gave me at least an extension for a year,” says Khan, who was set to experience a dramatic turn in fortune. A month later, he got another message from Doerr. This time, the philanthropist shared some priceless news. “Just now Bill Gates spoke about Khan Academy at Aspen Ideas Festival,” Doerr texted. Khan pinched himself in disbelief. “What’s going on? Is this a dream? Is this actually happening?” he wondered.

The tide turned. Over the next few months, Gates and Google pumped in $2 million each. “We were becoming a real organisation,” says Khan, who had now got the much-needed fuel to drive his vision and mission of providing free and world-class education for everyone across the world. Over a decade later, in 2022, Khan Academy is still passionately driving its ‘free education’ venture. Look at the numbers. Over 130 million registered users across 190 countries are accessing content in 51 languages. The impact globally is staggering.

Back home, in India, Khan is scripting a blockbuster. Khan Academy, which started operations in 2017, has over 1 million monthly active users, is supported by Tata Trusts, CSF, SBI Foundation, HDFC Bank and Kotak Mahindra Bank, and offers content in English, Hinglish, Hindi, Kannada, Gujarati, Punjabi and Marathi (see box). “India is fascinating, and has always been a place close to my heart,” says the man who traces his origins to the subcontinent and has Bengali as his mother tongue.

The India roots of the India journey, though, go back to 2015. It was Khan’s maiden visit to the country. “We got introduced to Tata Trusts,” he says in a Zoom meeting with Forbes India. Khan Academy had been working extensively on its project in Latin America and Tata Trusts wanted to do something similar. He met Ratan Tata, and the genesis of the India operations started.

Over two years of post-pandemic and online education, has the learning world changed for the better? How does he look at edtech unicorns and VC-backed startups in Silicon Valley, India and across the world? Khan shares his brutally candid assessment. “If I really want Khan Academy to be a long-lasting multi-generational institution, then it can’t get too caught up in trends,” he underlines, alluding to edtech startups bagging loads of VC dollars over the last two years. Though there are conversations within his team around work done by for-profit players and funding and all, Khan knows how to block the noise. “Do you think if we don’t do what we’re doing, these players will actually improve educational outcomes in whatever geography they’re in?” he poses a pertinent question to his team.

In an interview last September, Khan further clarified his take on online education post-pandemic. “What we’ve just gone through over the last 18 months is very, very sub-optimal. It isn’t the best online learning,” he candidly said in an interview to The Washington Post. “It is–you know, we could only describe it as pandemic learning,” he added. If I had to pick between an amazing in-person teacher for myself, for my own children, for anyone else’s children, versus the most amazing technology distance learning, etc., I would pick the in-person every time, he underlined.

Seen as a posterchild for distance learning, Khan has been scathing in pointing out the quality of the content. Though he underlines that there is value in for-profit edtech and the work done by them, he reckons that the impact is limited. “There are people creating value for subsets of the population,” he confesses. But even there, Khan lets on, they should recognise that there are free solutions like Khan Academy that can also deliver the same or better value.

Ask him to list out ways in which Khan Academy’s experience in the Indian subcontinent is different from the US, and the educator fires a silver bullet. In the US, he stresses, there was instant adoption. “In India there’s a cynicism about free education content. If it’s free, then it’s too good to be true,” he says with a smile. Though a section of the elite–those who are looking to send kids to American schools and colleges—are using Khan Academy, the majority is still reluctant. Most of them, he reckons, are programmed to believe that if they are not paying for it, their kids are going to fall behind. “I think the incentive of a lot of for-profits is to target that in security, and spend a lot of marketing dollars there,” he says. 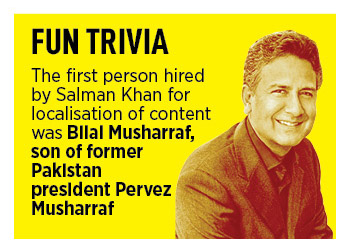 But is he not enamored by the unicorn tag? How hard is it for a not-for-profit organization to raise money in an environment when for-profits found themselves buried under dollars over the last two years? Khan gives us a glimpse into another side of his personality. “At times, there might be a quick pang of envy,” he says, alluding to the multi-billion valuation of organisations, which had the same starting line as Khan Academy. “But then the envy goes away very quickly,” he explains drawing upon his hedge fund experience. Those who got amazing multiples, got it on the back of a hyper-growth. As soon as that growth goes from hyper to normal, that multiple dies. “Once you get on the treadmill of valuation, it’s hard to get off,” he says.

Back in India, Khan Academy has grown at a decent pace. The educator, though, thinks the inflection point is yet to come. People in India, Pakistan and Bangladesh are very cost-conscious. The moment there is a flip in their minds, and they realise that there is better education and it’s for free, the academy would take off. So can Salman Khan get mass support in India? Can he play to the gallery the way his namesake in Bollywood does? Khan smiles. “I have watched many movies of Salman Khan,” he says, adding that he met the Bollywood star in 2015, and is aware of his massive popularity. “Every now and then, when I’m having less confident moments, I say that I’m Salman Khan,” he says with a laugh. His excitement, though, is always punctured by his wife. “When I was wooing her, she thought I was confused about which Salman Khan I was,” he adds.

As far as edtech education and impact is concerned, Khan is definitely scripting a blockbuster.

Check out our Monsoon discounts on subscriptions, upto 50% off the website price, free digital access with print. Use coupon code : MON2022P for print and MON2022D for digital. Click here for details.